World match racing tour had a break in its schedule as the wind and water conditions turned inclement on July 3rd being held in the waters of Marstrand in Sweden, there were gales and breaking waves around the Marstrand arena which made the beginning of the competition difficult. 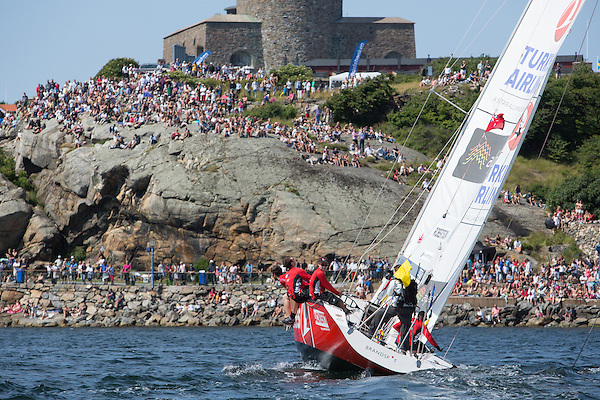 The organizers of the World Match Racing Tour stated that the wind was at 30 knots on average and there were gusts blowing at 40 knots. That made the sea state not ideal for sailing. The wind did drop in the afternoon, but the sea state was still not congenial for racing.

The crew stayed on the shores and appraised the situation. The America’s Cup has just gotten over and this is the year after the Olympic Games were held. Hence, the world class sailors who had come to participate in this Swedish island paradise were able to exchange notes and get to know each other better.

For instance, Kyle Langford was present, being part of the Oracle team USA and having finished the second round of competition in the America’s Cup. Here he is part of the GAC Pindar crew. He was accompanied by Pierluigi de Felice, an Italian and campaigner of the America’s Cup as well by 2003. The crew line up for this tournament in Sweden included several Olympic level sailors as the M32s are sailed with a bigger crew rather than small groups. Lobert and Eric Monnin for instance, are part of Albert Riele Swiss team. Lobert had been sailing an M32 catamaran for about four days. He states that sailing such a boat is fun and a change since you sail with a crew. It also involves match racing, which is new to many of the sailors participating in the event. Let’s hope this 23 year old event soon gets underway.